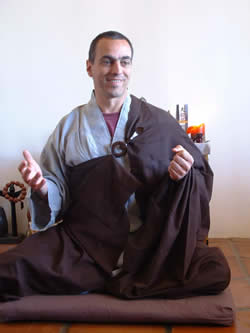 I will assume you know that these "biographical" introductions are generally written in the third person by the person allegedly being talked about! In the interest of transparency, honesty and intimacy, I am rejecting that strategy and I am going to tell you a bit about myself directly.

From the age of 4 or 5 years old, I’d been having experiences that only buddhism seemed to make any sense of (once I discovered buddhist books when I was around 10 or 11). These experiences were intimations of what the buddhist tradition refers to as "not-self" and "emptiness." I read some books about buddhism throughout high school, but more from curiosity than from any sense of necessity or desire to take up the practice.  My sister's death from cancer when I was 16 shook me to my core and I began a deep search for meaning in the face of mortality. At 18, I began practicing at the NY Dharmadhatu where I practiced for several years before making my way to the NY Zendo Shobo-ji. After a year or so there, I turned away from any formal relationship with teachers or community, but I practiced informally at Zen Mountain Monastery with no inclination to become a formal student. In 1989, I began practicing in the tradition of Thich Nhat Hanh, my dharma teachers being Lyn Fine and Patricia Hunt-Perry. By 1997, I ordained into the Tiep Hien Order. However, already by 2000, no longer thrilled by what I saw happening in the community, I began study with Samu Sunim who ordained me as a dharma teacher (poep sa) in Toronto on July 4th, 2007. I’ve earned a Graduate Level Diploma in Buddhist Studies under Peter Harvey through the University of Sunderland. Realizing I did not want an academic career, I chose not to write a thesis, hence no letters after my name.

While I have studied with many yoga teachers in a variety of styles and approaches, including Iyengar, Anusara, Astanga, Integral and Kundalini, I received formal certification as a Preventive and Rehabilitative Yoga Teacher/Therapist through The Bateman Institute in New York City. I was also certified through the 750-hour program of the Yoga Research and Education Center, under the direction of Georg Feuerstein.

I have two daughters, separated by 36 years and live in Tucson, Arizona where I enjoy co-parenting my younger daughter. I founded and served as guiding teacher of the Empty Mountain Sangha and the Tucson Mindfulness Practice Community which has evolved into a peer-led group. I have the great joy and privilege to teach classes, lecture and lead retreats and workshops throughout North and Central America, as well as in Asia. I was invited by Wisdom Publications to write a book integrating the four foundations of mindfulness with the movements and postures of hatha-yoga. That book, Mindfulness Yoga: The Awakened Union of Breath, Body and Mind offers a fully comprehensive and integrated practice of hatha-yoga-asana with buddhist mindfulness (vipassana) meditation based upon the instructions of the Buddha on the four Foundations of Mindfulness. I've had articles piblished in Tricycle, Yoga Journal, Spring Wind, Namaskar and Experience Life and am a contributor to several anthologies including Freeing the Body; Freeing the Mind: Writings on  the Connections Between Yoga & Buddhism edited by Michael Stone; Commit To Sit: Tools For Cultivating a Meditation Practice from the Pages of Tricycle edited by Joan Duncan Oliver; and 21st Century Yoga: Culture, Politics & Practice one of the first books to provide a multi-faceted examination of yoga as it is practiced in North America today, edited by Carol Horton and Roseanne Harvey.