Mindfulness Yoga: The Awakened Union of Breath, Body, and Mind 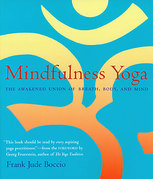 This groundbreaking book introduces an entirely new form of yoga, Mindfulness Yoga, which seamlessly integrates the Buddha's teachings on the Four Foundations of Mindfulness with traditional asana yoga practice. Mindfulness Yoga emphasizes the spiritual side of yoga practice, an aspect often overlooked in a culture that tends to fixate solely on the physical benefits of yoga. Unlike any other Buddhism-meets-yoga book, Mindfulness Yoga presents the two disciplines as a single practice that brings health to the body and liberates the mind and spirit, awakening compassion and fostering equanimity and joy. Author Frank Jude Boccio offers a superb and lively introduction to the Buddha's teachings and locates them within the larger context of the Indian spiritual traditions, then offers four complete Mindfulness Yoga sequences, including over 100 pictures, with detailed guidance for body, breath, and mind. Special lay-flat binding makes this book even more useful as a practice aid. Click here to purchase at Amazon.com

Yoga may be rooted in ancient India, but it’s morphed into something new in North America today.

Precisely what that might be, however, is difficult to say. Yoga is taught everywhere from spas to prisons, and for everything from weight loss to spiritual transcendence. With its chameleon-like ability to adapt equally well to advertising, athletics, and ashrams, contemporary yoga is a fascinating phenomenon that invites investigation.

Written by experienced practitioners who are also teachers, therapists, activists, scholars, studio owners, and interfaith ministers, 21st Century Yoga is one of the first books to provide a multi-faceted examination of yoga as it actually exists in the U.S. and Canada today. Click here to purchase at Amazon.com

Commit to Sit: Tools for Cultivating a Meditation Practice from the Pages of Tricycle

From the pages of Tricycle, the country’s most widely read Buddhist magazine, comes Commit to Sit, an introduction to the art of meditation. In recent years, interest in meditation has grown to include not only those on a spiritual search, but also those who are simply working toward a healthy and meaningful life.

This book brings together a broad range of Buddhist meditative techniques that have appeared in the magazine over the years. Contributors include some of the foremost voices in contemporary Buddhism

Though targeted to the reader who would like to begin meditating, this collection also offers support and guidance to the experienced meditator working to sustain a lifelong practice. This is a guide to meditative practice for any seeker wishing to deepen their understanding of themselves and their world.
Click here to purchase at Amazon.com
​Freeing the Body; Freeing the Mind

In this collection of provocative essays by prominent teachers of Yoga and Buddhism, the common ground of these two ancient traditions becomes clear. Michael Stone has brought together a group of intriguing voices to show how Buddhism and Yoga share the same roots, the same values, and the same spiritual goals. The themes addressed here are rich and varied, yet the essays all weave together the common threads between the traditions that offer guidance toward spiritual freedom and genuine realization.